The unpredictability of the gutskin is one of it's most appealing characteristics.  Although stretching and painting on the gutskin is interesting, I wanted to explore the medium more for what it is. Rewind and go back to the intrinsic value of it and how that can be used. 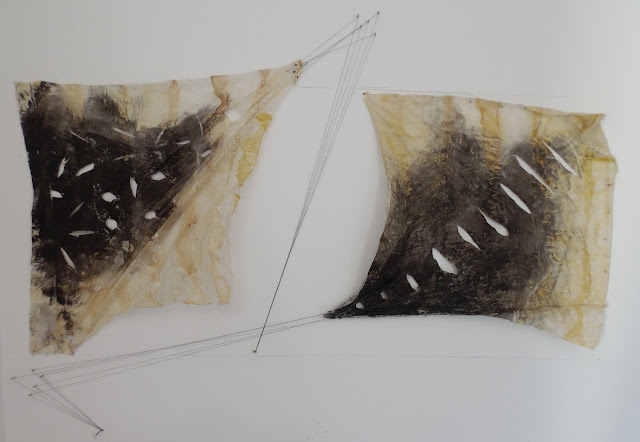 This is the latest work in progress in which I am exploiting that unpredictability. After the casing is laid out and dried, 15"X15" perfect squares are cut from the gutskin.  Using small brass nails, various cuts in the gutskin and thread sewn into certain corners of the squares, which is then used to stretch the re-moistened gutskin on a white wall, the resiliency of its surface is tested as it dries and reacts to the elements controlling its surface. The sharp angles created by the thread pulled and wrapped around the brass nails reacts to the natural buckling of the dried gutskin, which is buckled because of the tension created by the stretched thread.

Themes investigated in this include:

The manipulation of the gutskin versus its natural inclination create an acute tension that personally represents the volatility of US military life, which is reiterated by the universal implications it implies toward the tense and unpredictable state of global politics and unending war.

Here are the first seven (possibly making more) of the smaller resin boxes mentioned in an earlier post.

After constructing the boxes and applying the resin these are fun to put together. The contrast of color and surface between the high gloss resin and painted natural gutskin is interesting. As well the variance in how the gutskin dries and the final shape of the center cut, which is always unpredictable.


The following piece is done on a larger rectangle resin board. Again, the final effect of the gutskin isn't known until completely dry, and reacts to how it is bound to the board. 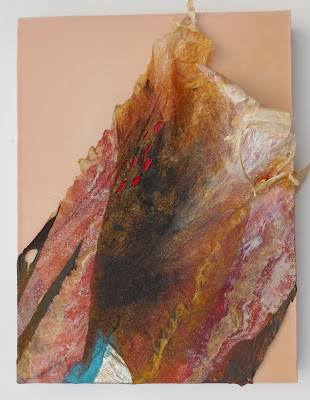 Catching up on posting some new work and finishing up other work in the last two weeks. I bought enough raw canvas recently to outfit the sails of a clipper ship and sail to Boston, so I've been making some of the 'exploded tattoo' paintings on the canvas.  Although I stretch and prime the canvas, I keep it lightly primed as I wanted the raw canvas to absorb some of the acrylic paint, and ink, which it does in different ways. It can somewhat mimic the way I use liquid acrylic in my spit-shaded pieces on paper. 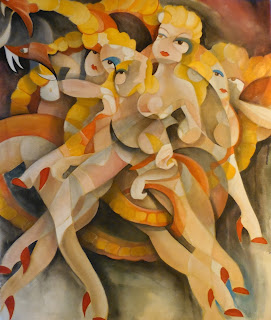 As mentioned in earlier posts, I want to investigate these images from tattoo flash that have become synonymous and indicative of that subculture, now much more mainstream.
When applying the stencil to a tattoo, (the non-permanent outline used by tattooers as a guide) it is important to have a clean outline. If there is error in application, a double outline can occur, or a 'feathered effect' will be left on the skin. This is not optimal.

In this painted work, I am purposely destroying a tattoo flash image by creating an new image from the effect of layering the same outline, then experimenting with how much of the original outline to maintain, while creating new outlines from the 'feathered' image.
The overall effect creates loose visual comparisons to early Cubism, in regards to analyzing and reorganization of an object, except this work is analyzing a two-dimensional image that's original purpose is to work as symbolic two-dimensional image that is strictly codified to tattoo subculture. In breaking down and re-contextualizing the image, the intended symbolism, and its function, is questioned.

The cartoonish elements involved, such as eagle heads and high heels, directly relate to tattoo imagery of which adheres to stylistic parameters indicative of this tattoo genre. 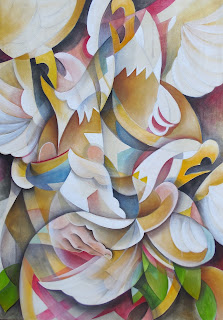 The following piece was done on gutskin. The difference in surface texture is obvious. 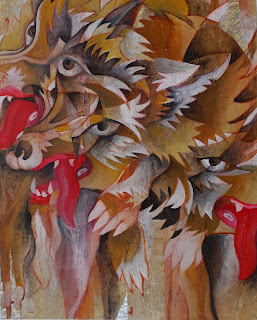 In addition to the paintings on stretched gutskin, I'm making some smaller paintings of ink on paper, spit-shaded.  This allows for experimentation with how far I want to abstract the tattoo imagery. 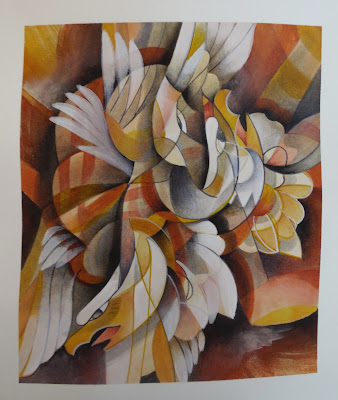 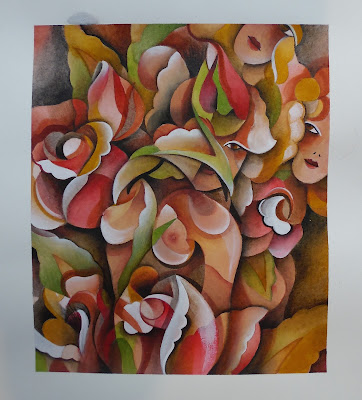 I was planning on not spending any more time on tattoo, but it continues to re-emerge.  I suppose having tattoos forever on my skin wasn't the only permanent mark it leaves, having worked the trade for years, it is definitely a part of my catalogue of images, however way that may play into current work.  I am interested in this 'image catalogue' and kinda want to exploit the rigidity of its representation in tattoo, by deconstructing those images on a flat surface.  However the gutskin also represents a pre-textured surface, which like skin, reacts to the medium applied. In this case ink and acrylic paint. The intrinsic narrative of the gutskin as being 'innards', the insides of a body, then interacts with the destroyed image taken from tattoo.  This questions the symbolic intention of the tattoo image, the ready-made reproductivity of that image as tattoo flash, and the symbolism that image maintains in its reproduction.

I am interested in the effect of breaking the tattoo image apart and applying it to stretched surface (especially one that interacts with the medium as gutskin does, both materially and symbolically) as something other than its commercial intention.  It stops being tattoo flash, as the deconstructed image operates in terms outside of tattoo counterculture and is left to reinterpretation.

smaller boxes and a bruised up piece

Building small boxes to interact with gutskin overlays. Experimenting with pigment and epoxy, staying in a fleshy palette. 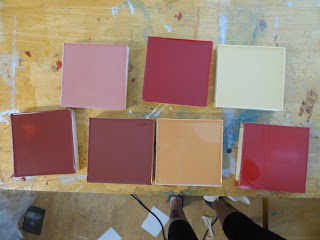 I also experimented with nailing the gutskin to canvas stretchers, and really tested the resiliency of the surface. This piece is after multiple layers of acrylic, liquid acrylic as well as simple egg tempera black. the pigment is rubbed into the gutskin, and dried multiple times while adding more layers.  The gutskin was then removed from the stretchers and reversed, and re-stretched, showing layers and in this case a full color palette.  The gutskin is amazingly resilient when wet (after it is initially cut, laid out and dried), this allows for multiple layering and manipulation of color.  How it will look is still unknown until completely dry. 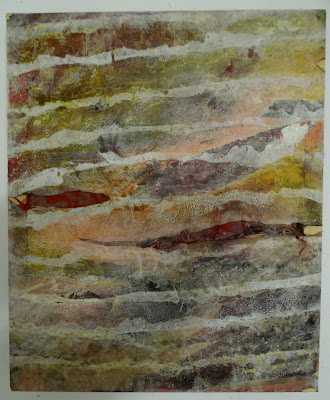 Not sure if this is done, or successful, but the surface texture is intense and has the appearance of being overworked, or abused, while still able to hold to the stretchers.  Even when the gutskin did crack, gutskin pieces were used to reinforce the opening.  I also enjoyed the variation of colors that were sometimes premixed, and other times mixed on the surface.  There is a 'rotting' look to it.

I changed the one from yesterdays post, and finished the next one in the series. I like the wrapping, the covering of the gutskin, around the high shine of the epoxied surface.  Inspiration from post WWII artists; Alberto Burri, Jean Fautrier, Gustav Metzger, Kazuo Shiraga, Robert Rauschenberg.

"...for these artists, destruction was not just a nihilistic act, and the void was not just a black hole of despair and anxiety: destruction was in a dialectical relationship with creation, and the void was a space of potentiality.  From the embers of the destruction of the picture plane emerged a medium reborn that powerfully registered the complex experience of living in a world perched on the brink of self annihilation." -Paul Schimmel, "Painting the Void". destroy the picture:painting the void, 1949-1962 (pp.188-203).

The similarities between that post-war sentiment and the 'post-current-eve' of war reality today is palpable. 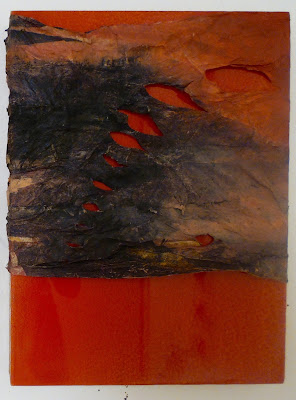 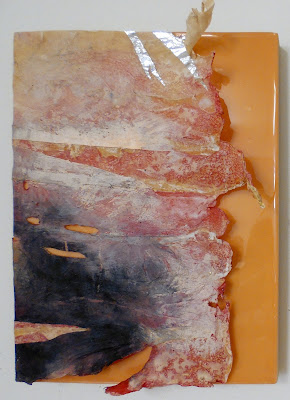 While waiting for the blue piece mentioned in an earlier post to dry, I started experimenting with possibly mounting the gutskin. I like the idea of what it's mounted on participating in the composition, and considered the surface of the mounting board to be very different from the gutskin.  A shiny manufactured surface, which I achieved with colored epoxy resin. 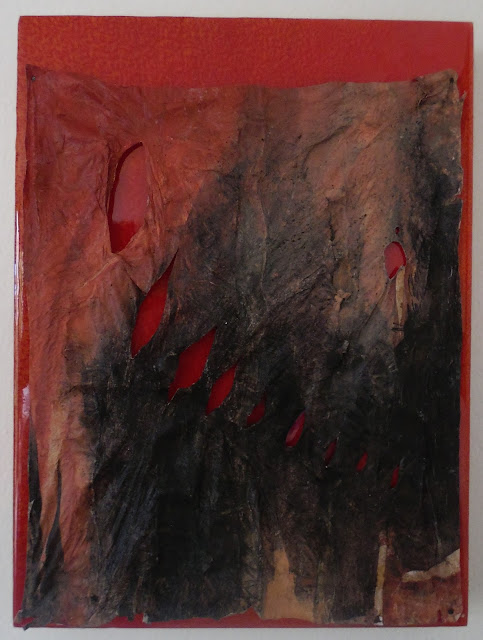 I cut reveal holes and cut the gutskin smaller than the board, nailing it with 4 contact points.  It will be interesting to see how the gutskin reacts to the board when it completely dries.

The juxtaposition of extremely different material is my intention.  The unpredictability of the natural gutskin (the black I used is also a simple egg tempura made from coal), nailed down to a pre-fabricated board covered in the high gloss of epoxy resin.

The uncertainty of the finished piece is exciting with a gutskin surface.  When it dries it does what its going to do, so manipulating that can lead to exciting discoveries. Also, gutskin is very resilient...it takes a beating and can be worked quite a bit.  I have found that working into it until it becomes 'gummy' can make interesting color variations, texture and dimension. 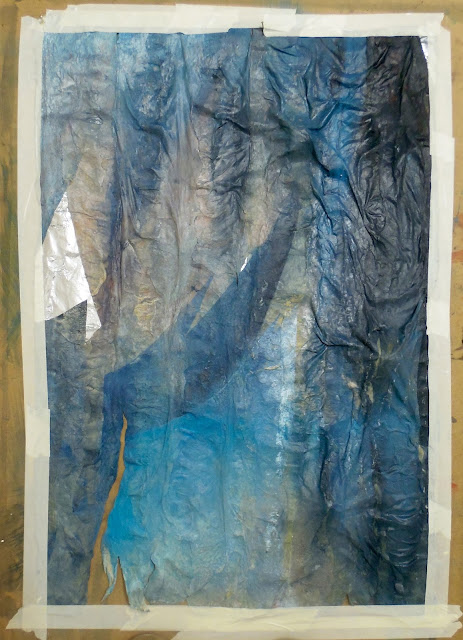 I like the translucency achieved in certain areas (scrubbed surface with ajax), as well as bunching of the right side (made by putting small balls under surface). I have taped it down to force the edge to hold shape, excited to see what this does.

The underside to the gutskin paintings are worth noting.  When the intestine dries, laying on top of the aluminum foil, the salt from the curing of the intestine pool up underneath and dries onto the intestine, so the effect is a bumpy briney surface.  I put a coating of gloss on this painting, and the effect is kinda cool.

The natural texture of the gutskin does interesting things when painted.  When the surface becomes wet, it 'gums' up a bit, becoming malleable and 'fleshy'.  It has a very living feel to it, which is exactly what I wanted when attempting to work with a once living product.

It has an unpredictability that can be manipulated, if you are willing to give up control a bit to what the acrylic does on the surface.  Techniques are developed during the process, ending in surface that is layered with interesting 'bits and pieces'.

Once finished applying paint, surface will need to dry.  Not until it is dry will the exact contortions of the piece be revealed. I like this uncertain aspect of it.  The buckling and ridges made in the intestine become apart of the process itself. The end effect is somewhat sculptural.

These first experiments are reactions to the pockmarked land in Verdun, how man-made destruction machines re-landscaped the Earth.  Working thematically with destruct/create, nature/nurture, anxiety/unpredictability (more to come on this). 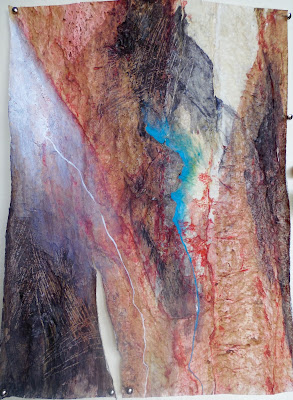 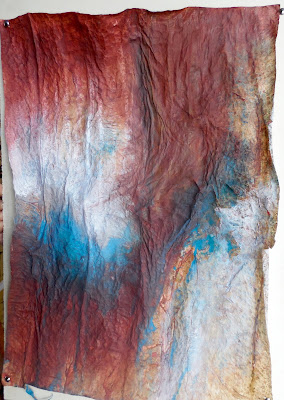 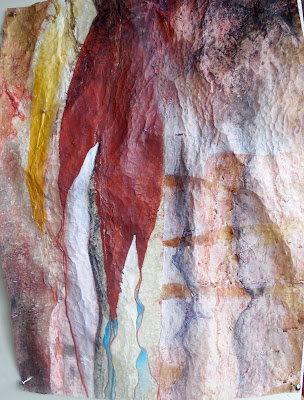 I want to keep going with this and develop the technique and eventually go larger.  Not sure if I like how the third one has the kind of stencil, hard edged shape.

Well some success today as another experiment in stretching and drying porcine casing to use as surface medium finally worked! After a few... 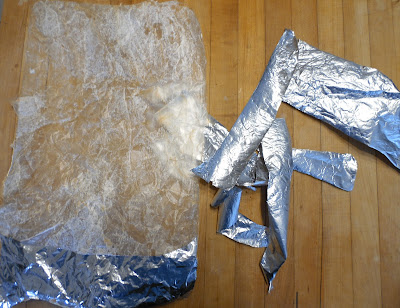